Home » Blog » Wine Me Dine Me: Moringa is the next big thing in health food!

Wine Me Dine Me: Moringa is the next big thing in health food!

Health food, introducing moringa, your next “superfood” powder, which, while it seems to be all over the place on health food sites and even Amazon, I first encountered last week on a trip to Belize.

While most people might go to the beaches and caves of this small country, when my husband, JimmyChiv, and I go to Belize, we stay in San Ignacio in the jungle, about 5 miles from the Guatemalan border. We like the bird-watching opportunities, the many Mayan ruins and cities from the past and the flora. Of course, I’m mostly interested in the health food and drink – how they make the tortillas or use coconut for example, or which fruit juice is best with my 3 Barrel Rum. 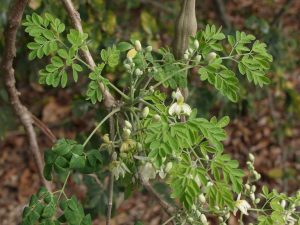 One of my first stops is the big farmers market in town where we can buy tomatoes, plantains, and tropical fruits along with meat and fish. We pick up snacks like salty squash seeds and dried banana. On our most recent trip, we found an expat selling his own brand of peanut butter, Red Parrot, made with just peanuts and sea salt as well as granola bars with Belizean made cacao nibs and honey. He also had little baggies of herbs and spices, including chia, turmeric and this new green powder I hadn’t heard of before, moringa. He was a bit taken aback that I hadn’t heard of it before, and so was I after I looked into it more. How did I not know about this? So I snatched some up to try out. Click To Tweet

In the past, I’ve told you all about matcha, that bright green tea powder from Japan which, in the U.S. and other Western countries, we’ve identified as a “superfood.” For a while there, I was frothing up matcha just about daily and ordering matcha lattes and shakes when I could find them. Next came turmeric, dark orangy-brown, aromatic and suddenly also ubiquitous in lattes and cooking of all kinds – even cocktails.So now I know about moringa, another ancient plant that’s been marketed as a superfood. Click To Tweet

There are quite a few species of the tree (a.k.a. the miracle tree or drumstick tree), but the one that’s cultivated the most is Moringa oleifera, found in India at the foothills of the Himalayas. Other species are found throughout Africa and Asia and since it grows well in the tropics, in Belize, too. Roots, leaves, flowers, pods, and seeds – you can use it all Click To Tweet. The roots taste a bit like horseradish I was told.

As you can imagine, every part of the tree is packed with nutrients. It’s not a “superfood” without them, right? High in vitamin C and iron, moringa leaves also have four times the vitamin A found in carrots, seven times the vitamin D found in oranges, three times the amount of potassium of a banana, three times the amount of calcium found in milk and twice the protein of yogurt. As with any great nutritional plant or tree, it also has medicinal uses. It’s said to have antioxidant and anti-inflammatory uses as well as uses as an anti-diabetic and anti-cholesterol agent and so many more. Click To Tweet

Like matcha or turmeric, you can use it in many ways. You can find the powder online and in health food stores and the leaves, dried or fresh, at Asian or Indian markets. You can sometimes find the pods there, too, which taste a bit like green beans. Use the earthy tasting powder in smoothies and lattes, of course, but also use the leaves sprinkled atop your avocado toast or salad or used as a spinach substitute. In Africa, the powder is also used to make sauces. I made a tea from the dried leaves I bought and it was quite delicious. Click To Tweet

Place all smoothie ingredients in a high-speed blender and blend until smooth.

Chef Gaby Velez has opened La Casita at the Kittery Circle (the projected date is 2/3/2018 so check the website to make sure since things do get delayed in the restaurant world). Gaby has been a health food chef in the area for years including at Brazo in Portsmouth and at La Casita. He’ll bring his Puerto Rican and Cuban cuisine to Maine with rice and beans bowls and sandwiches including a Cubano. It’s one of those create your own bowl spots with a choice of protein and vegetables, the type of beans you want and then sauce. Check out the menu here and be on the lookout for their opening which might have already happened. Visit lacasitaonthecircle.com