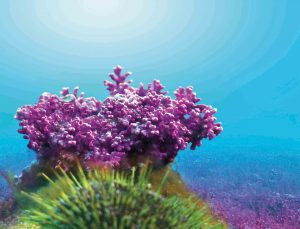 Red Marine algae have been studied over many years and have frequently been found to positively modulate the immune system, which strengthens it Click To Tweet for those prone to always picking up the latest bug doing the rounds.

Many naturalistic practitioners use red marine algae to treat patients with chronic fatigue. It has also been shown to possess anti-inflammatory, analgesic and gastro-protective properties, as well as a few other uses that may surprise you.

What is Red Marine Algae?

Algae is categorised by its colour, or pigment. Red marine algae belong to the Rhodophyta class and are well known for their high antioxidant content, which may help boost the immune system to fight off free radical damage. Red algae contain an antiviral compound known as carrageenans that are believed to boost the immune system and offer protection against diseases such as the shingles virus, HIV and cold sores. Click To Tweet It may even help fight strains of germs that are resistant to certain medications.

As well as boosting the immune system, red marine algae come with a host of other proven benefits.

Lutein and zeaxanthin are carotenoid antioxidants that may prevent macular degeneration because they are concentrated in the macula and make up the macular pigment. They function both as an antioxidant and as blue-light filters to protect against damage.

Many different forms of algae have been found to contain anti-inflammatory and pain relieving properties due to the high chlorophyll and omega-3 fatty acid content. A 2016 study published in Pharmaceutical Biology found that red algae is a natural source of compounds that contain potent biological and pharmacological properties, including gastro-protective, analgesic and anti-inflammatory activities. Click To Tweet

Results of the study found that the Mediterranean red algae Laurencia obtuse contains significant pain-killing and anti-inflammatory properties. It’s also known for its gastro-protective ability in that it is able to inhibit a gastric ulcer by as much as 81.3 percent when taken in the amount of 50 milligrams per kilogram.

Algae is a rich source of a plant sterol called fucosterol, which has been shown to naturally lower cholesterol, among many other health-related benefits. What’s more, algae are a good source of phytosterols, which have been shown to reduce “bad” or LDL cholesterol levels when taken in supplemental form by lowering intestinal cholesterol absorption.

Red algae are packed with antioxidants, further benefiting the immune system. A 2013 study found that ethanol extracts of the Callophyllis japonica and Gracilaria tenuistipitata species of red algae have antioxidant effects on the body, such as activating cellular antioxidant enzymes and suppressing certain mechanisms that kill off healthy cells. Red algae may also be able to help prevent DNA damage and fight chronic fatigue with its high antioxidant content. Click To Tweet

Antioxidants play an important role in boosting immune system health by neutralising free radicals and moving toxins out of the body. They are also naturally detoxifying and may assist in heavy metal detoxification, weight loss and restoring blood pH levels to an alkaline status.

One of red algae’s most notorious uses is for the prevention of the herpes simplex infection. Click To Tweet According to a 2006 study published in Plant Medica, an isolated compound from the red seaweed Gigartina skottsbergii was shown to be a potent inhibitor of the Herpes simplex virus types 1 and type 2.

According to a 2015 study, sulphated polysaccharides “have several important properties, such as anticoagulant and/or antithrombotic, immunomodulatory ability, antitumor and cancer preventive, antilipidemic and hypoglycaemic, antibiotics and anti-inflammatory and antioxidant, making them promising bioactive products and biomaterials with a wide range of applications.”

The study showed that red algae is beneficial in fighting against the HIV type 1 and type 2, the human papilloma virus (HPV), the encephalo-myocarditis virus, the hepatitis virus type A and type B and the dengue and yellow fever virus with its powerful antiviral,… Click To TweetSupplementing with Red Algae vegan capsules is a good way to boost the immune system, fight free radical damage, ward off disease and even balance pH levels, which can aid in weight loss.