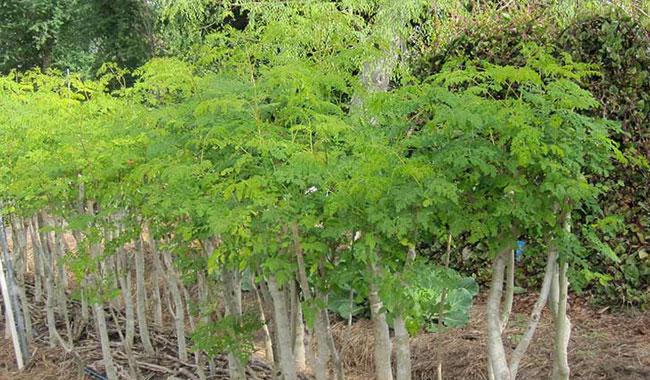 HYDERABAD: Sindh Agriculture University (SAU) Tandojam has recently distributed more than 5,000 seedlings of the nutritious and drought-resistant moringa tree (suhanjana) to different farmers and organisations working in the rain-fed and agriculture areas of the province.

Promoting moringa cultivation, especially in the arid and semi arid zones of Thar and Kachho during the fresh monsoon season, could turn the landscape drought-resistant and help the local populace cope with climate change.

SAU has aims to involve researchers by strengthening collaboration with local farmers to see the opportunities for sustainable food production in the food-insecure areas. “It is part of a move to promote indigenous trees, which have higher nutritional value and are used for fodder,” Dr. Sehrai told The News.

Moringa tree grows fast and has high nutritional value in all its parts – leaves, pods, seeds, flowers, roots, and even the bark, which provides protein, calcium, minerals, iron, and several important vitamins. This tree does not need much watering and generally grows without fertiliser or any chemical inputs.

The university distributed more than 5,000 seedlings to different farmers and organisations, the VC said, and added, “We are establishing a nursery to produce more seedlings in the university premises this monsoon.” He said initially they grew 5,000 extra saplings for planting along the university pathways. The tree has a high tolerance to grow in heat and in any soil type. 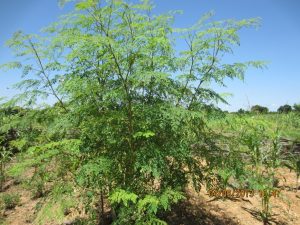 Moringa trees can grow up to 3 metres high within its first year in a tropical climate.

Prof Muhammad Ismail Kumbhar, SAU focal person, and expert on vegetation said, “Moringa is one of the indigenous valuable plants, which we are going to promote for food and fodder production. This technology will be transferred to herders, farmers and common citizens to get benefits.”

Prof Kumbhar said moringa tree might be a better alternative for the herders of the Thar Desert, who migrate annually to the barrage areas for grazing their animals when fodder was short and dryness settled in their native areas.

He lamented the dry spell and the disturbed rain pattern which had depleted many indigenous species of trees and shrubs in the Thar Desert, leaving people in a helpless situation. He encouraged graduates of the university, students, teachers, and researchers to work on the moringa tree in collaboration with the local communities. Initially, the communities and farmers would plant these trees for their own consumption, but later it could be used for commercial purpose too.

Tharparkar district has already received hundreds of moringa seedlings in different areas in the past and many of those trees have now grown and were benefitting the local communities. However, activists and locals have claimed that excessive use of machinery and tractors was destroying these trees and other valuable plants which were a necessary source of sustenance for the locals.

The moringa is also known as the “miracle tree of life” in Africa and other parts of the world where malnutrition and drought both have been a challenge for the communities. The seeds of the moringa were also being used in countries like Ghana to purify water.

Dear readers, today I want to take you to Chuadanga Sadar. I went there to meet Kola Quader (Banana Quader), famous for his banana production. But, this Kola Quader has now turned into moringa or drumstick grower. Since morinaga is a very nutritious food, Quader is more focused on its leaves and brought a new dimension in Bangladeshi farming scenario by making the moringa leaves more and more significant. Quader has planted a lot of moringa in his village. Although you may recollect Quader with his bananas, let us see the other side of his farming with moringa.

His small homestead is full of greenery. It can be said that his house itself is a complete farm. His courtyard is full of various plants and trees, including moringa.

Abdul Quader took me to show his area. He showed many moringa plants by the roadside, some very old and some new, mostly planted by his own hands. It is a great thing to learn that farmers are well aware of the value of moringa, both health and financial.

The nutritional value of moringa leaves makes moringa itself a super food. In many countries of the world, since long before, it has been talked about. Many consider it to be a medicinal tree. These days, moringa is being considered a combination of food and nutrition. Earlier, in Bangladesh, moringa did not much have much value to the farmers. One or two moringa trees used to grow in a corner of the homestead without any care. However, now, considering the market value and demand for the tree, farmers are considering planting more moringa trees. But, many farmers are still unaware of the moringa leaf but they all know about the drumstick. Abdul Quader’s work in promoting the value of the moringa leaf is really praiseworthy.

Upazila Agriculture Officer Talha Zubair Mashrur, too, has already done studies on moringa and says there are lots of advantages in the crop.

It has protein, vitamins, amino acids and beta carotene, along with many more minerals. Every part of a moringa tree has some nutritional value. The oil extracted from moringa seeds has astonishing nutritional value. Nowadays, many countries are exploring the business of moringa trees. To mention a few places, South Africa, Malawi, Cambodia, Philippines, Kenya, Ethiopia, along with many other countries, are farming moringa commercially.

Demand for moringa tablets with nutritional values added is increasing day by day in Europe and America. They are being sold through online markets like Amazon or Alibaba. A file of 100 tablets is sold from $15 to $25, which is about Tk 1,500 to Tk 2,000. This has also started in Bangladesh in a limited way. Already people like Rajib Parvez have started to encourage people to grow moringa tree, collect the leaves, and distribute it among the people. He tells us that just as it is a magical ingredient for people, in the same way it can also be beneficial for the livestock animals and plants. Rajib has already done multifaceted tests regarding the various uses of moringa leaves.

Dear readers, in an age of advanced technology, it is easy to find out the advantages of something. Moringa or its leaves have come to us as a surprise in this regard. We hope that the medicinal or nutritional value of moringa tree or leaves will be known to all and that planned expansion of its cultivation takes place in the country.


Moringa will soon be used to fight malnutrition in India

Loaded with health-giving properties, moringa or the Miracle Tree should be the newest addition to your superfoods chart if you haven’t.  Found and grown easily in parts of India, moringa, according to health studies contain more Vitamin A than carrots, more calcium than milk, more iron than spinach, more Vitamin C than oranges, and more potassium than bananas.”

Given this huge health benefits and healing properties, scientists of the Maharaja Sayajirao University of Baroda (MSU) in Gujarat, who have, for a long time been vocal about the inclusion of moringa leaves in one’s daily diet plans to propagate this food into parts of the country’s region.

Based on the information of moringa or drumsticks, the state National Health Mission (NHM) department will soon publicise the benefits of Moringa across Gujarat and encourage the citizens to consume not just drumstick fruits but also its leaves and bark in a bid to fight malnutrition.

These results were reportedly found by a group of scientists from the Department of Foods and Nutrition following a series of clinical trials, who discovered that drumstick leaves have a very high content of beta-carotene, which is a precursor of vitamin A.

“The trials proved that beta-carotene extracted from drumstick leaves is equally effective as compared to synthetic doses which are otherwise recommended to those suffering from Vitamin A deficiency. So, it is much better, easier and cheaper to consume the leaves directly or in dried form instead of popping pills and tablets,” said Dr Nambiar, who has been studying the nutritional benefits of the superfood for the last two decades told a daily.

They also added that moringa which is loaded with amino acids can increase the immunity of the body and detoxify at the same time. This superfood, which can easily acclimatise to parts of India has hence been suggested to grow across the premises of public health centres, health centres, school compounds and the likewise.