How Moringa seeds are saving thousands of rural Kenyans without clean water!

Moringa seeds can help this situation. In Kenya 17.3 million people lack access to clean water with water-borne diseases like diarrhoea and Cholera being the leading cause of death for children under five years, a situation replicated in Sub Saharan Africa and worldwide.

Last year 10 people died and over 200 were hospitalized in Western Kenya after consuming contaminated water. A recurrent phenomenon in the country that points to the extent of water woes.

Water treatment solutions are out of reach for many households with the majority of them averaging between 0.50$ to $5 USD. The other alternative is boiling which has equally been deemed expensive and environmentally unfriendly due to the amount of fuelwood used.

But a group of women have found a low-cost method of purifying water, which is now backed by science. Embracing seeds from the wonder tree Moringa Oleifera, over 3,000 women predominantly from Central Kenya have borrowed the low-cost purification concept from their counterparts in South Sudan who rely on the muddy River Nile for drinking water.

How the seeds cleanse dirty water

The process starts with the grinding of the seeds into a paste which is then poured into the untreated water and given time to trap the impurities before settling at the bottom. The women then decant the pure water off the top. The seeds also remove turbidity, the cloudiness, in the water.

“I was among the first women to try this concept about three years ago. We fetch water from the rivers which are usually contaminated and it had become increasingly expensive to buy the synthetic water purifiers. Officials from the Ministry of Health came and gave this new method a clean bill of health. We now rarely get water-related borne diseases like Cholera or diarrhea,” said Tabitha Muondu one of the beneficiaries of the purification method.

Once the crushed seeds are added to water, they have a magnetic force that attract dirt particles including disease causing organisms. Dirt is hooked to the seeds and once it settles in the bottom of the jar, the water is fit for drinking. 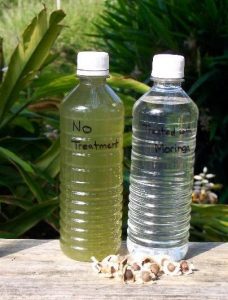 Image: Water treated with Moringa seeds on the right and untreated water on the left.

Clean bill of health from scientists

Scientists from the Ministry of Public Health and Sanitation say that the purified water produces between 90 and 99 percent reduction in bacteria. Conventional water purifiers contain aluminum salt as the active ingredient. The natural coagulant in Moringa seeds dubbed the Moringa Oleifera Cationic Protein (MOCP), act the same way as the aluminum salt in trapping dirt and killing bacteria.

“As the demand for water purification methods soars, companies that make water purifiers are now under dosing chemical treatments which reduces their potency and that explains why most of what we have in the market is not effective. With Moringa seeds we have ascertained that the natural coagulant is so powerful that a few seeds can purify a large mass of water,” Said Dr. Morris Okwemba a researcher at the Ministry.

Increased uptake across the country

The method has gained traction especially in rural areas where the Moringa tree is easily accessible. “This tree has always been here in our compound but I never knew the enormous benefits it has in its seeds. We only learned about it through a farmer exchange program and we have had neighbors coming to borrow seeds to plant the tree.

This is the greatest revolution for us the rural people,” said Maria Oketch from Western Kenya.

Researchers, however, warn that the purification method should be concentrated for domestic use where the purified water is consumed right away. Mass purification would be counterproductive since if stored for long, the water starts producing an odor and a weird taste.

The inexpensive water purification method has received the backing of science with numerous studies pointing to its efficacy. A joint research by University of Botswana and Uppsala University was able to successfully remove impurities from water using the Moringa seeds with researchers hailing the method as the ultimate answer to millions in the world who struggle with access to clean water.

“It’s amazing to see that simple interactions between molecules can solve practical problems. Understanding this process can lead to further developments in water purification using naturally occurring and environmentally friendly materials,” said Adrian Rennie, one of the researchers in the project and a Professor of Neutron Scattering at Uppsala University. 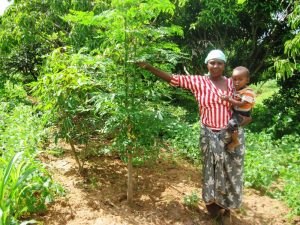 Image credit: A farmer with her child standing near Moringa oleifera tree – Trees for the Future and agroforestry

As an alternative to the use of synthetic chemical such as alum with the cost implications, locally available seeds zogale (Moringa olieifera) and Bagaruwa(acacia nilotica)  can be used as  natural water treatment agents, Professor Umar Abubakar Birnin Yauri has said.

The Professor of Analytical Chemistry Usmanu Danfodiyo University Sokoto, told Caliphate Trust that  they were specially ideal for rural communities where high cost of treated water forced many inhabitants to resort to readily available sources with the attendant risks of exposure to water borne diseases.

Zogale is a popular vegetable in cuisines in northern part of Nigeria while Bagaruwa, is commonly used for medicinal purposes and in leather processing in the region.

“In Nigeria, we use alum to treat water, the problem is alum is imported, it is not manufactured in Nigeria, so we thought of using bioflocculant, a plant product used for flocculating the water. We tried zogale and it is doing very well, we have tried Bagaruwa and we find it is also working well,” Professor Binin Yauri  stated.

According to World Health Organisation:” Globally, nearly two billion people use either unimproved drinking-water sources or improved sources that are faecally-contaminated. Over half a million diarrhoeal deaths in low- and middle-income countries are attributed to inadequate drinking-water,”

“Plant can act as water coagulant.”

He described the technologies involved as cheap and easy to use.

“It is very suitable for rural areas”.

Prof Birnin Yauri said in a comparative study on the use of plants as flocculants in water treatment, different plant seeds and leaves were screened to find primary coagulant able to reduce the turbidity of drinking water.

He noted that the plant used in the study to include Moringa oleifera, Habiscuss Sabdariffa and  Corchorus Tridens.

“The study found that raw water can be treated considerably with the use of plant material, noting  that that as a biological process, it does not generate any non-treatable wastes.

“The physical, chemical and bacteriological analysis proved that the performance of the plant as water coagulant was within the world health organization standard limit.”

The Analytical Chemist harped on the need to exploit the potentials of plants material for raw water and waste water treatment.