Moringa benefits are becoming known now, becoming more popular worldwide. The people of the Indian subcontinent have used the drumstick for centuries and know the Moringa benefits widely. The tree largely grows in India and in many parts of Africa such as Ethiopia, Kenya, Somalia, and Madagascar. The widely grown species of the thirteen species is the Moringa oleifera. Moringa benefits for health are plenty since it comes with lots of crucial compounds such as vitamin A, vitamin B1, riboflavin, calcium, potassium, phosphorus, and many others. As the nations of the world become alive to the benefits of the Moringa plant, it is not difficult to see it transformed into several forms for easy use. It is available as a powder in wellness stores, tea in grocery shops, and in many other forms. 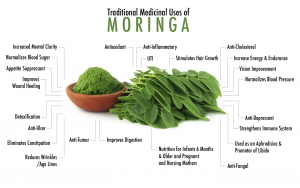 Scientifically known as M. stenopetala, the plant is referred to as mother’s best friend. The drought-resistant and hugely evergreen trees play a significant role in the livelihoods of Ethiopian and northern Kenya households. Its evergreen nature ensures that families in some of the semi-arid or arid areas have a constant source of greens even when no other plant seems to be able to do just that.

A tree can support a family of ten when things are bad for some time, at least until other sources of vegetables have been found to supplement the diet. It plays many roles besides being used as food in these areas. It is a major supplement for animals that is also used as fodder. Its beneficial properties make it important in improving milk production and improving the overall health of animals like cows and camels.

It is also used as a shade when the drought bits hard and a windbreaker in times of strong winds. The other major benefit that we must talk about is the medicinal uses of the African Moringa. As a medicine, Moringa is used to protect the liver and the kidney, maintain sugar level, ensure an even skin tone, and check cholesterol levels in the body. Click To Tweet Moringa benefits and side effects While societies have for long used Moringa for various medicinal purposes, it is arguably reasonable to say that science has caught up with its usage rather late. But as scientific investigations continue to take shape so do many more benefits get to be known.

There is a host of Moringa benefits for men for instance that have greatly raised the profile of the plant. The plant is now known to treat erectile dysfunction and enhance the general sexual performance of men. This is due to its unusually high concentration of Vitamins A, C, and D. The combination plays different roles in the male sexual performance cycle. Vitamin A, for instance, is extremely vital for sperm production and virility while Vitamin C improves the immune system to prevent dysfunction and improve blood circulation to male sexual organs. Vitamin D, on the other hand, is good for the production of testosterone. The presence of minerals like zinc, iron, and calcium in the plant also does aid the production of testosterone in men. Click To Tweet

There are even more Moringa benefits for women. It is for instance known to help in weight loss, a subject that in the past few decades seems to have occupied the minds of too many women. As women approach their fifties, they undergo some radical enzymatic and physiological changes. The changes can be pretty much difficult to adjust to since they all need a good number of vitamins for ingestion. The multivitamin nature of Moringa comes in handy. We are yet to meet a woman who is not concerned about her hair and as such Moringa benefits for hair are quite exciting. With a combination of vitamin A, B1, B2, B3, B4, B6, B7, B12, B14, B17, E, and Zinc, Moringa is able to assist in hair growth, hair repair, hair strand formation, and avoid unwanted hair loss ensuring strong and healthy hair. Click To Tweet Like their hair, it is also reasonable to agree that skin quality is also a big thing. Moringa benefits on the skin are so huge especially in determining a desirable skin tone. The plant contains the mineral called organic sulfur which has since been nicknamed the beauty mineral in some circles. This mineral enhances the development of a healthy skin giving it a beautiful look.

Many have also argued it is an anti-aging agent. Moringa Benefits for Women During Menstruation, Menopause, and Lactation The plant also comes in handy for women during times of the monthly menstrual cycle and while making hormonal adjustments as menopause begins to take effect. Click To Tweet The abundance of iron is extremely necessary for young women who will immediately need to revitalize their blood supply or be anaemic as the monthly cycles come and go.

Besides iron, women undergoing menopause need calcium to deal with the drastic changes and their side effects. In the same line, potassium in the plant helps deal with cramps and PMS when combined with vitamin B12. The weakening of bones that come with menopausal changes is also adequately addressed since the plant supplies easily ingestible calcium and iron both of which are essential in bone strengthening. Click To Tweet

The last of the benefits for women is the fact that has been known for centuries, it enhances lactation i.e. it improves the production of breast milk for new mothers or mothers with twins. Having looked extensively at the specific benefits for both men and women, we have to be aware that many Moringa benefits and uses do exist and they are just good for everybody. Click To Tweet Recent research has shown several such uses.

The commonest part of the parts consumed is the leaves and pods i.e. either as food, tea, in tablet or in capsule forms. The benefits of Moringa leaves and pods are many since these are almost the major parts taken, most nutrients of the plant are passed through them.

Other Benefits of Moringa

More research is still being undertaken in various places around the world. So the benefits we will provide should not be taken as an exhaustive list Moringa extracts are now known to provide comprehensive protection to the liver. It achieves this through a series of nutrients like epicatechin catechin, vitamin C, and ferulic acid. Treats Edema as it has very efficient anti-inflammatory qualities. It is an anti-bacterial agent protecting against a wide range of microorganisms ingested in food. Click To Tweet

It is essential to curing cancer. This is probably one of the most important conclusions arrived at by various researchers. Its phenolic components kaempferol and quercetin give it chemopreventive properties. Moringa treats stomach disorders such gastritis and constipation. It deals with Neurodegenerative Diseases efficiently. It helps to boost immunity. Protects Cardiovascular System as it has pretty powerful antioxidants. It is effective in treating diabetes. Research has shown that it regulates glucose, urine proteins, and urine sugar in various diabetic tests. It is known to prevent the formation of kidney stones Reduces the risk of hypertension. Treatment of anaemia and the sickle cell disease. Consideration for the use of Moringa for medicinal purposes must be strictly be done by a qualified physician. It has potential side effects like inducing abortion in some cases. Pregnant women will need to be cautious.