Health Breakthrough! How this man changed his life 10 years after tumour Surgery! 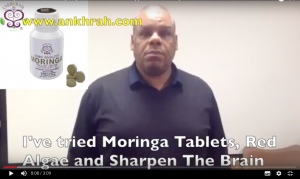 Watch Peter as he shares his “health breakthrough” experience of struggling to achieve optimal health and recover from a tumour operation 10 years ago. He received an amazing health breakthrough while using Ankh Rah’s natural high-quality supplements.

Transcription of the interview

All the content in this video is for information purposes only and not intended for medical advice.

My name’s Peter. I’ve tried Moringa tablets, Red Algae and Sharpen The Brain. As it’s winter and I suffer from a pituitary condition the tablets I take suppress the immune system and my doctors and other health professionals tell me to have the flu jab. I had that in the past but I just ended up being ill. I figured that if I could if I could take a really good food supplement
then that will help build my immune system where my current tablets suppress it and see what other benefits I’ve got so it’s primarily to boost my immune system.

What benefits did you receive from using Ankh Rah supplements?

Experienced more vitality, more energy, clearer skin Click To Tweet, initially. The main benefits I found was when I went to see my endocrinologist earlier in the month and he was very impressed with my results because one of the issues I was having was since the brain tumour operation was a lack of growth hormone in my body. Now
as adults, you don’t really need it because the body’s fully developed and everything but you still need it for vitality and I suppose muscle growth and he was really impressed he said it became normal and this has been an
ongoing problem for me for 10 years so he said if I went to see the professor at Bart’s where I’ve been before he said they would just decline me because now it was within a normal range and I was really shocked because it just came out of the blue and the only thing I can put it down to was taking the Ankh Rah products. Because I was taking all three, as I said Moringa tablets, Red Algae and Sharpen The Brain. There’s a strong likelihood because I had a brain condition now it’s more likely it’s going to be Sharpen the brain.

When did you start using Ankh Rah supplements?

Seven or eight weeks ago so the turnaround in improved results happened very quickly Click To Tweet. How long did you have this condition? Well the growth hormone issue, 10 years.

Did you try any medication to try and get rid of it?

No the only thing you can do is to have the hormone injection.